You will understand why this is one of the most sought after careers in the Air Force as you take the controls of the most awesome military aircraft in our fleet. Have you always wanted to be a pilot? How about joining the Royal New Zealand Air Force? You’ll get to operate some of the cutting-edge military aircraft in our fleet, and also play a vital role in command and management positions throughout our organisation. It’s fast, tough and one of the most exciting careers in the world.

Once you’ve completed pilot training, you’ll concentrate on organising and conducting military operations and tasks in New Zealand and throughout the world. Currently this involves specialist training onto the A109 Light Utility Helicopter, P-3K2 Orion, C-130H Hercules or Boeing 757.

Initially, in your primary role as aircrew, you’ll fly as an operational Co-pilot, but with further training and experience you’ll soon make the leap to becoming a fully qualified Aircraft Captain, and then Flying Instructor. As a Commissioned Officer, you’ll also be required to perform military command and leadership duties, and with additional training could go on to fill senior command or executive management roles.

Whilst on RNZAF Pilots Course your daily activities are fairly proscribed, enabling you to concentrate all your energies on the comprehensive and sometimes testing training system. But once you are a qualified Pilot, one of the big attractions of the RNZAF as a career is that the elements of your day to day job are wildly variable. Whilst the standard working day for Defence personnel is 0745 to 1630 sometimes you may well find yourself in at 0300 planning for an 0500 take off on a Joint Forces task supporting an Army training exercise in Waiouru. Alternatively you could be starting work at 1400 because you are planned to fly the Prime Minister of New Zealand and members of Cabinet into three regional airports later that night. The point is that an aircrew working day is varied, never gets boring, and is almost always infinitely flexible!

In addition to your primary role you will also carry out other duties, such as commanding a base sports team, or being a member of the Officers Mess Committee organising social functions, or filling an aviation safety or welfare role on Base. You will be helped to develop some solid personal and time management skills in order to achieve your weekly tasks, and whilst you’ll rarely be sitting around twiddling your thumbs, you’ll find there’s almost always time for a kick-about in the gym, or a quiet swim in the base pool.

On an exercise or an operation overseas you will conduct daily flying in support of deployed forces. This could involve taking medical and or food supplies to where it’s needed, transporting an Army unit and their equipment to a Landing Zone, or even providing long range transport for an entire NZDF deployment to Afghanistan. On arrival you might find yourself assisting the establishment of a tented camp, or in charge of a security detail, and you will also be heavily involved in the set-up of flying operations.

When on deployment it is important to socialise with other international militaries and organisations. You will often spend time learning about other cultures and you will quickly learn that the Kiwi forces are well respected in the international community for our friendliness as well as our professionalism.

For us in the Air Force, we have alot of flexibility in the roles we do. Once you've proved yourself, you get given alot of responsibility. I was thrown in the deep end and you end up thriving on it and you look for the next challenge.

Being an Air Force pilot is a dynamic, challenging, but highly rewarding role with excellent career opportunities. Later in your career you may become a Flying Instructor, take on NZ based ground roles such as an Aviation Safety Officer or planner at Joint Forces Headquarters, or do an overseas tour as a United Nations Observer or Air Liaison Officer. All these positions offer the potential for overseas travel, courses and postings.

All individuals selected to become Commissioned Officers in the Royal New Zealand Air Force (RNZAF) are required to complete this course. It is designed to prepare students with the knowledge and experience necessary for commissioned service and the beginning of a career in leadership. This course will cover various subjects including:

On completion of RNZAF Officer Commisioning Course you will travel to Auckland to complete some pre-requisite courses for wings. This includes a day of parachute jump instruction, a week long aviation medical course to teach you about the physiological effects of flying, and a survival course giving you theoretical and practical experience in bush, sea and coastal survival techniques.

This course gives you all the experience you need to earn your wings. You will begin with ground school to learn the fundamentals of flying including:

During the ground school phase you will use the T-6 Texan II ground based training aids to learn emergency checklists and procedures. Once you have learnt the basics you will be ready to transition to the cutting edge T6 flight simulator and the T6 aircraft. During the course you will achieve approximately 220 hours in the simulator and aircraft, covering a range of flying disciplines including:

On completion of this you will be presented with your RNZAF Pilots Brevet (“wings”) and be streamed to either rotary or fixed wing aircraft types.

Helicopter conversion course is done on the A109 for those streamed to a rotary career. You will start with ground school in helicopter related theory before learning to fly in our state-of-the-art A109 simulator. After learning the basics in the simulator you will fly the real thing, covering most of the flying done on wings but in the rotary environment as well as extras such as flying on night vision goggles, carrying underslung loads and winching. After this course you will either remain on the A109 as a co-pilot or do a conversion course for the NH-90.

Those streamed to fixed wing will learn to fly the King Air 350 (KA 350), our multi-engine light transport aircraft. This course will teach you about the added challenge of multi-engine operations and consolidate your instrument flying in preparation for our large fixed wing aircraft. You will spend up to 18 months on the King Airs before converting to the Boeing, Hercules or Orion aircraft.

As a pilot you will constantly be training throughout your career. Following a posting to a squadron and an aircraft conversion course you will fly one of our operational aircraft, working on your skills so you can be signed off for different tasks as a co-pilot or eventually as a captain.

Once you have gained experience as a qualified captain on an operational aircraft you may be selected to train to be a qualified flying instructor. Flying Instructors Course takes about 6 months and is held in Ohakea on the T6 Texans. After Flying Instructors Course you will usually do a short posting as a flight instructor for new pilots before returning to an operational squadron. However, some may stay and become a member of the RNZAF Aerobatics Display Team, the Black Falcons.

Outside of flying there are many leadership development courses you may do that can lead to a career as a Commanding Officer of a squadron or a strategic role in Joint or Defence Force Headquarters.

Careers in the Air Force are well-rewarded, as well as being diverse and exciting. As you become more experienced and move up through the ranks, gaining additional skills and qualifications, you will see your salary rise accordingly.

You must have achieved NCEA level 2 with a minimum of 18 credits each in level 2 English, Mathematics and a Science.

Your training is some of the most thorough and advanced in the world. On graduation, you’ll be contractually obliged to serve another ten years in the Air Force. Bear in mind that your role changes every day and you’ll be working in a range of jobs both here and possibly overseas. 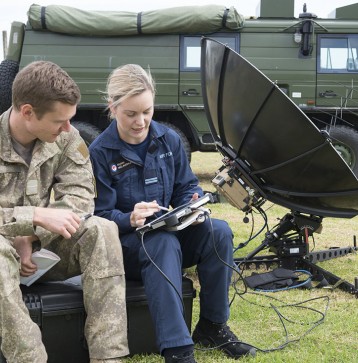 Air Force | Intelligence, IT and Communications
Back to top